Radio Voz started its operation in Dili, Timor Leste, in 2003, a time when the nation was still living the trauma of the bloody conflict of 1999. Started by the initiative and support of Christian Vision, through Brazilian missionaries who were working in Timor Leste at that time, Radio Voz has been on the air since then 24/7, with 100% Christian programming. So far, Radio Voz is the only evangelical radio station in the entire country.

To make the Truth and Light of the Gospel of our Lord Jesus Christ penetrate Timorese homes, and thus bring transformation to Timorese individuals and families, impacting the entire community. 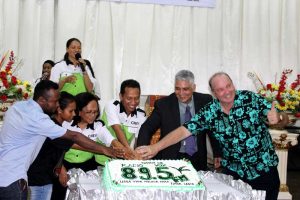 Spread the Gospel through radio waves, via preaching biblical messages and playing Christian songs; bring a message of hope in God to the Timorese people; propagate the values of the Christian life taught in the Holy Bible; pray live for the nation, the nation’s leaders, and for all the people.

With a 1Kw transmitter, and the antenna positioned at the top of the hills in the eastern part of Dili, Radio Voz can reach a distance of up to 200 km of range in the highest regions. Therefore besides the entire capital Dili, a good number of villages along the mountains are easily reached by Radio Voz waves. We have an average of 6 thousand monthly participations in live programs, via SMS and social media. 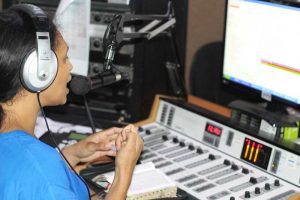 Most of our programs are live. We have specific programs for children, for women, for young people, Bible teaching programs, reflection on specific topics, prayer programs, short Christian messages throughout the programming, national and international news in Tetun and Bahasa Indonesia languages. And a lot of Christian songs. All of our presenters are born-again Christians and active in their respective churches. We mainly use four languages: Tetun, Portuguese, Bahasa Indonesian and English. Both programs and songs are in one of these four languages.

We operate on a non-denominational basis. We are open to working in partnership with any Christian church, as long as it is consistent with the same principles and faith that we believe, from the Word of God, the Holy Bible.